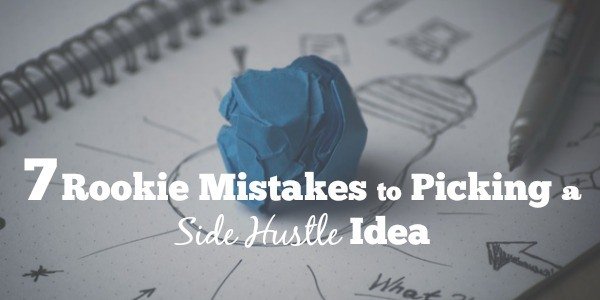 So you want to start a side hustle, now what:

Well the first step is to pick something that speaks to you.  However I find this one of the toughest part for most people to get past.

In fact this one hurdle often stops people right in there tracks from moving forward.  In this article I’m going to share the top seven mistakes people make when choosing a side hustle idea and how you can avoid them.

If so keep reading and you’ll be on track to launching your side business.

Mistake #1: Picking Something that You See Everyone Else Doing

Your looking to start a side hustle of your very own and you happen to come across some internet guru’s website and you see that they have a very successful business doing freelance writing.

You think to yourself:

I could do that.

The problem comes that in a split second you’ve made a decision to start a side business solely on the fact that you’ve seen someone else who was successful and you want that same success.

This is one of the biggest mistake to picking a side hustle.  You think just because someone else has been very successful at something that you can do the same. I’ve come to find it doesn’t always work like this.

How to Avoid this Mistake: In the end this a good way to help you come up with ideas of different side businesses you could start but don’t pick something just because you saw another persons success with it.

Rather keep a list of those ideas so you can refer back to them later once you’ve had some time to review which idea is the best one for you.

Mistake #2: Doing Something that Doesn’t Fit Your Skill Set

One major reason side hustles fail is because we pick something that just doesn’t fit our skill set.  For example you might think that a one on one coaching business might be a great fit for you.

However you fail to realize that you are more of an intervert type person who doesn’t enjoy talking to people and find it mentally and physically draining.

I know for me this is the case, this is why I stick to mostly passive types of side hustles and not with something that drains me.

How to Avoid this Mistake:  The key to avoiding this mistake is to focus on your strengths and not your weaknesses.

Take a moment and list out your top strengths and weaknesses.  Knowing these way ahead will help you avoid this trap and to find a side hustle that complements your skills.

Mistake #3: Doing More than You Can Handle

The next major mistake is to take on a side hustle that requires you to put in more work than you can possibly handle.

My very first side hustle was like this.  I joined a network marketing company way back in 2004 selling life insurance and investments.

While it was fun at first, I found myself putting in nearly 20 to 30 hours per week which took a lot of time away from my family.

But that wasn’t the worse part:

How to Avoid this Mistake:  Before you start your side hustle determine how much time you actually have available in a week to put towards it.  Then take a moment to evaluate how much time it will take you to manage your side business on a weekly basis.

For example, with my side hustle I find that I need at least 3 hours per week to create weekly content, and send out my weekly newsletter.

On top of that I also need another 5 hours per week to work on my current project list and another 2 hours to deal with miscellaneous things from answering email to update WordPress Plugins.

That alone adds up to a minimum of 10 hours per week.  Knowing all of this ahead of time will save you a lot of frustration.

Another area to think about is the cost involved in running a side hustle.  No matter what kind of side hustle you have you’re going to have to invest at some level.

For example, you might be thinking about starting a ridesharing business and you might think all I have to do is download the Uber or Lyft app and your up and running.

To start you will likely need to carry some form of extra insurance, you’ll also have to cover the extra fuel you’ll need to drive people around, wear and tare, and you may even need to upgrade the vehicle you are driving because both Uber and Lyft  require you to have a vehicle that is fairly new.

If you’ve been reading my Monthly Updates you’ll see that I’m spending at the very least almost $30 a month keep my business running.

How to Avoid this Mistake:  The best way to avoid this mistake is to do your research and see what kind of cost are really involved with the side hustle you plan to start.

Make a list of all these cost.  You’ll also want to see how much money it will take to keep your business running on a regular basis as well.

Once you know these cost you’ll be able see what you need to earn to keep things going.

Mistake #5: Picking More than One Side Hustle

One mistake that has gotten me in trouble more time than I can count is choosing more than one side hustle.

This may be a big issue for you right now.  You’ve chosen two ideas that you like and you can’t decide which one is the best on to go with.

You decide to do both of them thinking you can test them out at the same time.  The problem comes when you don’t have enough time to put towards them both and out of pure frustration you give up.

I’ve been there before and it can be tough to choose just one idea.  So what should you do if this is your situation…

How to Avoid this Mistake:  To start you will want to pick just one idea.  I know this hard but pick the one that speaks to you the most.

Then I want you to make a commitment to stick to it for the next 6 months.  If after 6 months things just aren’t working out then you have my permission (not that you need it) to try the other side hustle.

However my guess is that this will likely not happen and you will have chosen the right side hustle for you.

Mistake #6: Going to Broad with Your Niche

The Riches are in the Niches.  – Pat Flynn

Niching your side hustle done differentiates you from everyone else.  If you’re side hustle is broad and big then it will be harder for people to understand what problem you can solve for them.

How to Avoid this Mistake: The best way to make sure your side hustle is niched down enough is take it down two to three levels.

For example, if your side hustle is one on one coaching for online business owner you might want to niche it down to something like people who sell digital courses, and you could even narrow it down further to people who make less than $10,000 a month and want to earn more than 5 figures a month.

By narrowing things down a bit more people will see you as the solution to this problem and be more likely to pick you over your competitor.

Mistake #7: Picking Something Just for the Money

The final mistake to make is choosing something just because you can earn a bunch of money from it.

A good example of this for me was when I was looking at creating my own private label products and selling it on Amazon.  I was following several people in this niche and they were talking about how they were making hundreds of thousands of dollars a month at this.

This got me interested in it right away but over time I started to realize that I didn’t care anything for the product I was selling or what it could do for people and the money became my sole purpose for this venture.

It was at this point I realized that what I really wanted was the money and not to help people.

How to Avoid this Mistake:  First off understand that almost any side hustle has the potential to earn you a good income, so don’t be fooled into thinking that only certain side business can earn a big income.

Finally, realize that any side hustle you start the most important thing is providing value to your customers not to earn money.  Earning money is just the byproduct of creating a good product or service.

Have You Made any of These Mistakes?

So have you made any of these mistakes when it comes to picking an idea for your side business?  As you can tell I’ve made my fair share of mistakes as well.

Now I would like to hear more about your thoughts here.  Are you currently in the process of choosing a side hustle idea and are you having a tough time coming up with something, or do you have a few ideas you’ve been considering but you’re not sure which one to go with?

I would love to hear you’re thoughts in the comments below on what issues you’ve gone through when it comes to choosing the idea that’s right for you.

Trends come and go, but they sometimes leave a significant mark. The eCommerce industry has seen a lot of growth recently, and it would not be a stretch to suggest that its trends are affecting...

If you're new to affiliate marketing and looking to earn some extra money on the side then this can be a great way to do it. The question is what programs should you start with? With so many...

What Kind of Side Hustle do You Want to Start?

I am an affiliate for many of the products mentioned on this site and may earn a commission if you click on my links and purchase any products.

Earning will go towards bringing you new content and growing Side Hustle Academy.  Thanks in advance.