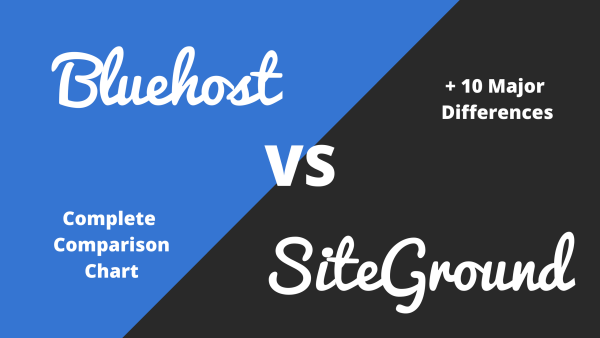 Whether you’re brand new to online marketing or you’ve been around for a while you probably know that you need some type of hosting to share your website with the world and earn a side income online.

The problem is not all hosting companies are the same and knowing these things up front could save you tons of wasted time and money.  In this article, I’m going to compare both Siteground and Bluehost to see which is really the better hosting option for your online side hustle.

Before we start I just want to state a few important things upfront.

First I am an affiliate of both Siteground and Bluehost.  I feel both platforms have something great to offer and if you do decide to buy through one of my links in this article I just want to say thank you in advance for supporting us.

Second, my goal here is not to make one company or another look bad here but rather state the facts and share where both companies differ.

Finally, both platforms offer various types of hosting options but for this article, I’m going to stick to mostly shared hosting because that is the most common type of hosting people will start out on.

With that said let’s get started.

Below is my complete chart comparing Siteground vs Bluehost, however, make sure you check out what comes after the chart as I will share the ten major differences between these to hosting platforms and who the winner is.

Now that you’ve had a chance to review the chart below are the 10 of the biggest differences when it comes to Siteground and Bluehost.

One thing I noticed right away when I switched to Siteground was that the server had fewer sites on it than my previous hosting company.  Now don’t get me wrong there are well over a hundred sites on the server I’m on now but it seems like the previous company I was with had more sites crammed on one server.

The benefit to this is that you don’t have as many sites competing for server resources and ultimately slowing down the server overall.  There are ways to overcome this with things like caching or using a CDN but a quality server with less will go a long way to reducing load time.

One major difference Siteground and Bluehost didn’t match up on so well was the shared hosting web disk space.  This is basically the space a hosting company will give you to host your website.

With Sitegrounds Startup Plan you only get 10GB (Gigabytes) while with Bluehost you’ll get 50 GB.  That’s five times as much hosting space for a lot less the cost.

When we compare the GrowBig Plan from Siteground which is a step up you get 20 GB.  With Bluehost, you get an unmetered amount which basically means you’ll get all space as you need.

Finally, with Sitegrounds GoGeek Plan you get 30 GB while the Prime Plan gives an unmetered amount.  As you can see Bluehost is the clear winner here.

Next, let’s look at the optimal visitor capacity for each of the shared hosting plans and see how they compare.

With Siteground you recommend the following…

With Bluehost, they estimate that you can bring in up to 100,000 monthly visitors with any of the shared hosting plans.  Now, this doesn’t mean that you can’t put more than the monthly capacity on Siteground but if you want the best optimal performance than you’ll want to follow the guidelines they’ve set.

In the coming months, Google will be getting tougher on sites that don’t have SSL.  SSL basically encrypt the data you send around the internet from your site to the people who visit your website.  In fact, some rumors even suggest that Google may send you to a separate page prior to going to your site to let visitors know that your site is unsecured.

To know if a site is secure just look for the green logo in front of the URL.  It should either say Secure or HTTPS.  Below is what secure site looks like.

Doing this has become more commonplace even for small-time bloggers like me.  The problem is SSL can get fairly expensive especially if you own several websites.

However, there is a free option called Let’s Encrypt.  This is a special add-on that only certain hosting companies carry and Siteground is one of them.  To learn more about Let’s Encrypt click here.

Next, we have shared hosting email capacity and both platforms have a very different way of dealing with this. Below is how much space Siteground gives.

Now here’s how much space you get with Bluehost

Other than the basic plan from Bluehost they offer unlimited email capacity which is a pretty good deal while Siteground has limits on all of their plans.

Siteground has developed their own caching mechanism that lets you speed up your site dramatically.

Caching basically allows you to store the most the most recent version or your site on there computer so when they visit it again they wouldn’t have to depend on pulling all of the data straight from your server but rather from the visitor’s computer.

This means you’ll be able to keep your servers load down and serve your sites faster.

The next area Siteground beats Bluehost is site transfers.  With Siteground they offer to migrate 1 site for you completely free, while Bluehost charges $149.99 to transfer 5 sites and 20 email accounts.

While I get that site migration can take a lot of time to do, I like Sitegrounds approach to this because if you want someone to stay a customer of yours for years to come what better way to do this than to offer to migrate 1 site for them so it gets people using the hosting right away and seeing the value in what they have.

With Bluehost, they hit you up with a fee to do this which might be ok for some people but not everyone wants to spend a $150 right off the bat especially if they were planning to keep things cheap and go with one of the lower cost hosting plans from Bluehost.

One way I think Bluehost could beat Siteground and other hosting companies at this are by offering to migrate one site for free and then offer the 5 site package deal.  If you’re like me you can’t just own one website and this sets up the opportunity to get people to buy the migration package.

Over the last few years cloud hosting has become really popular, and both Siteground and Bluehost both offer it.  The only problem is they are not the same, but before I get that you might be wondering what is cloud hosting?

Cloud Hosting – Cloud hosting is the procurement of computing resources from a cloud computing provider or facility to host data, services and/or solutions.  ~Techopedia

If that still left you a bit confused check out the video below.

Basically, cloud hosting is not centralized to one single server but rather is spread out over multiple servers all over the world.  Based on the package deal you get depends on how much server CPU access you get.

For example, with Siteground you get the following.

So basically with Siteground the higher the package you buy the more CPU cores you will get.  On the other hand with Bluehost, you only get 1 CPU core no matter which package you buy.

Now it’s time to get down to brass tax and discuss the cost.  I should that this is just the pricing of the shared hosting.  So let’s see how they compare.

The prices I’m about to share are the prices you pay after your first inital year of hosting.  I’ll cover more on the discount pricing up next.

Here is what you could expect to pay when you sign up for Siteground.

Now let’s compare that to BlueHost

In the end, Bluehost is cheaper but don’t base everything on the cost but rather as the package deal.

Finally, we have the discount cost.  This is how much you save on the first initial year of hosting.  We’ll start with Siteground first.

Discounts for SiteGround range between 40 to 50% with the first year discount. Now let’s see how Bluehost does.

With Bluehost they range between 38 to 54% discount, however, I feel the best discount is with the Bluehost Prime Plan since you’re only paying the same as the Plus Plan and you get all the features.

However, as I mentioned before don’t base your decision on just the price alone. Make sure you take the time to look at all the features and benefits before you buy.

And The Winner Is…

Overall I feel both platforms compare very equally but in the end, I think Siteground is the winner for one major reason, the free SSL option with Let’s Encrypt.  Afterall this was the whole reason I switched from my previous hosting provider to Siteground.

Sure Bluehost cost is cheaper and they offer unlimited web space with their shared hosting plans but that’s not the reason I switched.  With the web slowly trending toward SSL it’s becoming more apparent that companies like Google want you to go this way.

You can sign up for Siteground by clicking here now.